President Trump set off a firestorm after tweeting that Congresswomen Alexandria Ocasio-Cortez, Ilhan Omar, Rashida Tlaib, and Ayanna S. Pressley, collectively known as “The Squad,” should “go back and help fix the broken and crime infested places from which they came,” despite only one of the members (Omar) having actually been born in another country. The President’s comments were widely interpreted as racist and condemned by Democrats and numerous Republicans, and have led to House Democrats introducing a resolution to condemn the comments, but there is a broader discussion not being addressed – how should Republicans, and the country at large, confront identity politics? 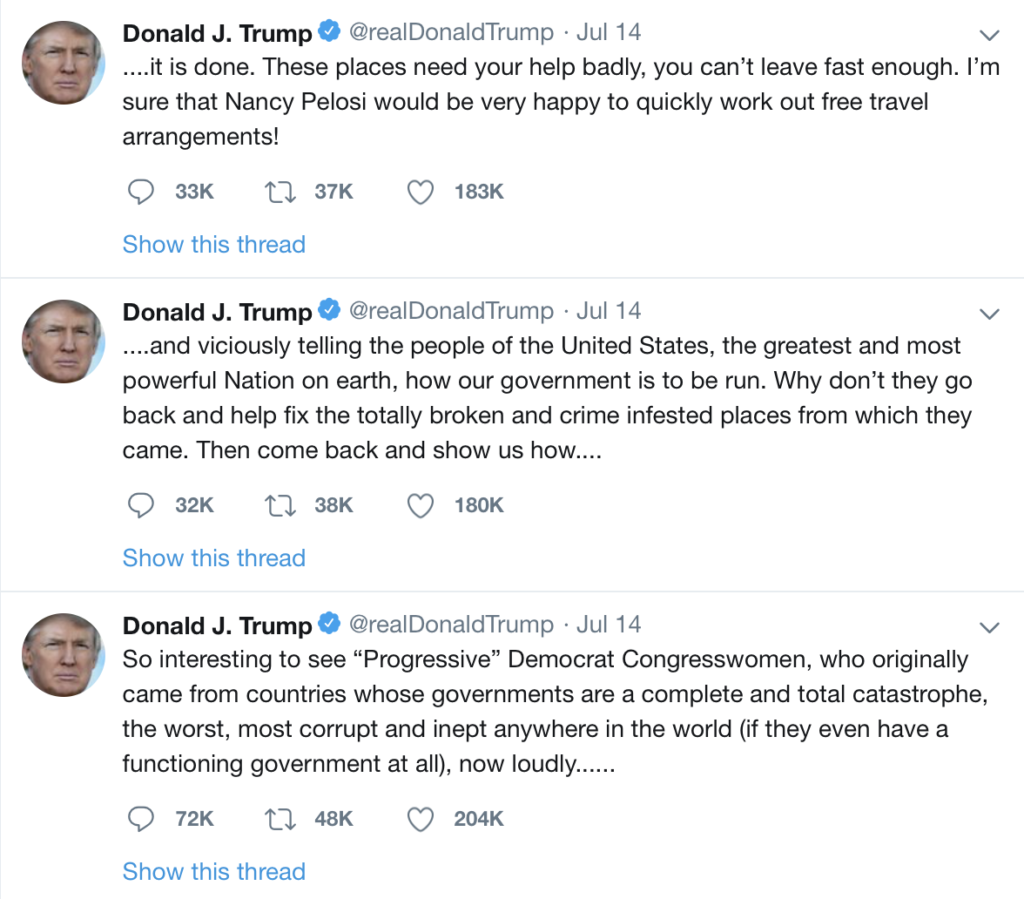 We Must Acknowledge Racism, Even If It’s from Trump

This language stung to the core of all people of color, Democrats and Republicans alike, who are well experienced in being told to “go back home” to countries they’ve never lived in. As an American citizen of Pakistani-Canadian origins, I remember people being afraid of me for how I looked after 9/11 even though I was a child. I remember being told by Muslims and Christians alike, that being LGBTQ was evil and that I would be destined for Hell. I remember being told “not to come back” to the U.S during the height of the Muslim Ban by a rogue CBP Officer, for which I received an apology. I’ve also been told in liberal enclaves all over our country, that I wasn’t welcome because I supported conservative positions and politicians.

I was elected as a Precinct Committeeman by the Seminole County, Florida GOP approximately 1.5 years after the Pulse Massacre. I was embraced by a largely Christian group and empowered to advocate against things which I was deeply against- inefficient single payer health care systems, overwhelming government, and intolerance in America’s most representative county. Some of these people would end up telling me that they have never had a positive relationship with an LGBTQ person of color or came from depressed economic backgrounds, having seen their parents lose their small-town factory jobs.

I grew up for part of my life in Canada where I witnessed how underserved my community became by a system of government that only made promises to garner the votes of minorities. In comparison, the United States allowed me to start a business that would land me in a top economic bracket at 26. It educated me at its best schools and empowered me to fight radical Islam. It was enough of an experience that led me to start filling out the paperwork to renounce my Canadian citizenship in order to start an application to commission as an officer of the U.S. military.

Therefore, it is extremely disconcerting when as people of color we try to address identity politics on both sides of the aisle. The far right may call us Secret Democrats and far left calls us Uncle Toms, regardless we are simply a group trying to transcend the conversations of race and tribe with an understanding of the historical context as the conversation of the U.S. should be.

Should minority conservatives simply vote for Democrats? Are only whites allowed to have open discussions filled with nuance? Why are both Democrat and GOP bases so insecure with even their own trying to simply have discussions about important ideas? This is after all Democrat style outrage culture as we’ve largely seen in our society. I’ve always believed it is important to give the President credit when it is due but now all Republican lawmakers need to stand up and condemn these tweets. So far only Will Hurd, Susan Collins, and Angus King have responded to the remarks. If the GOP isn’t careful, it may soon find its unprecedented victories reversed by the very same extraordinary inertia that landed Trump in the White House in the first place.

We Need To Combat Victim-hood Culture

Every time the President makes a controversial tweet that could in any way be interpreted as offensive, it seems to set off the same chain of events – Progressive Democrats widely label the comments as racist and call for a resolution, a handful of Republicans condemn the President so as not to appear out of touch or to warn about the potential political consequences, another handful rush to defend the President on his favorite cable news shows in an attempt to curry favor, and everyone else tries to say as little as is necessary. None of this is constructive.

Arguing over whether or not to condemn the President, or any other elected official for that matter, for offensive comments may take the sting out of some remarks and remind us all that we should choose our words carefully, particularly when we find ourselves in a position of influence. Ironically, the debate is similar to another unconstructive dialogue – how Republicans are constantly the victims of a left-wing media machine. It even has a similar (albeit inverse and less emotional) chain reaction where a left-leaning individual makes a statement, Republicans widely oppose it, and search for Democrats to call out the ridiculousness.

After seeing the proliferation of identity politics over the past decade, we can see that calling out such comments has not curtailed them. Similarly, the country’s awareness of media bias and the willingness of politicians to combat it has not led to any more civil and centrist of a press corp. In a world where everything is discussed for being racist and biased, we have ignored meaningful actions to improve either.

Minority conservatives should not be dismissed and are just as conservative as any other members of the party, just as media bias should be something we strive to improve. But at the same time we cannot pursue and must actively combat a culture of victim-hood – it is as much of a side-note to condemn the President as it is to ask a news station or a tech platform to issue an apology or correction.

Perhaps we have a broader cultural challenge than anyone would like to acknowledge – we have encouraged victim-hood whether we meant to or not, and are now systemically incorporating people’s disadvantages to define their opportunities. People are maligned for their “white privilege” just as a person of foreign descent is maligned for their origin. We’re concentrating too much on what a person has gone through as opposed to where they are trying to go.

The United States is not just anecdotally, but statistically, a heavily optimistic country – an Atlantic article in 2015 made some interesting comparisons between the U.S. and rest of the developed world – yet we do seem to be turning to leaders, media, and products (namely social media platforms) that instead focus on the pessimistic experiences of contemporary life. Looking at the comments above, imagine if the President had simply reworded a few phrases and emphasized how four congresswomen were promoting inept big-government policies that had no chance of success, and Democrats were instead calling for a repudiation to small government and the need for federal involvement in more aspects of people’s lives? It would be more constructive, though it wouldn’t get the public’s blood boiling. Maybe that’s the real problem.