“It grabs one’s attention that the number of people in these kinds of caravans is on the rise,” Clark Alfaro said. “It is migration of a different dimension.”

What started out as a group of about 2,000 Honduran, with some Guatemalan and El Salvadorian, migrants headed for the US last week has amassed into a group of over 7,000 on the Mexico-Guatemala border. About a third the size as of yesterday, the Honduran Foreign Ministry has called the caravan an “irregular mobilization,” “accusing unidentified ‘political sectors’ (later found to be Honduran ex-legislators Bartolo Fuentes, Wilmer Simon Gomez, and Michael Fajardo) of organizing the caravan with ‘false promises’ of a transit visa through Mexico and the opportunity to seek asylum in the United States.” Mexico required Hondurans in the caravan to show a passport and visa, apply individually for refugee status, or face deportation. President Trump threatened to cut off foreign aid to Honduras, El Salvador, and Guatemala if they didn’t manage to stem the flow. 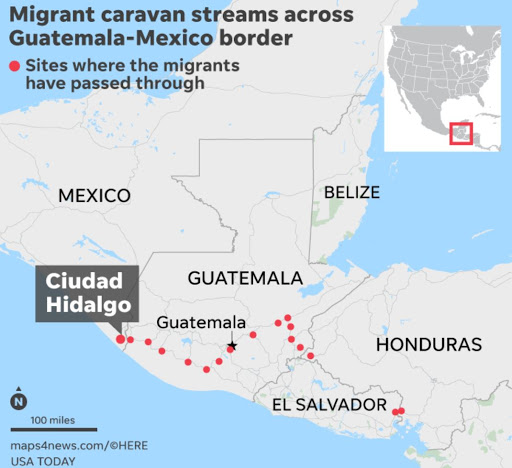 Until 2014, most migrants on the southern border were single, adult males that could be deported within hours. The proportions have reversed since then, being comprised mostly of Central American teenagers and families who cannot be easily deported. The BPC reviews border statistics going back to 2012 to give insight into why new migrant flows are testing our immigration system. The solution: US officials must invest more resources into examining complex asylum claims.

CIS reviews the previous caravan from March, discusses the strides Honduras has made in public safety, how foreign aid has influenced this trend, and possible motivations for a caravan forming now.

Leading Figure in the March

A former Honduran lawmaker, social activist, and the supposed leader of the caravan, Bartolo Fuentes reveals how he decided to help out, just as he had done with a previous migrant caravan last April.

Of those that may be deported from the caravan, MPI has previously reported on Central Americans (Northern Triangle citizens) deported from the US and Mexico. It offered, “a demographic, socioecomic, and criminal profile of Central American deportees, finding that the majority are young males with low educational attainment levels, most having experience in low-skilled jobs, but with nearly 40 percent reporting they were unemployed in the 30 days before setting off on their journey. Among children under age 18 who were deported, the majority are boys between ages 12 and 17.